Breast cancer does not discriminate. No matter your background, occupation, or social status, all women are at risk of developing breast cancer.

The current figure stands at 1 in 8 women, and this number is equal to all women no matter where they live, or who they are. Breast cancer is the great equalizer that treats all women the same.

So it is no surprise that some big household names have had their own battles with breast cancer. Fame has given celebrities affected by the illness a huge platform in which to spread awareness and help other women who are going through the same battle. Here are a few examples of celebrities who have beaten breast cancer and have gone on and made incredible efforts to spread awareness and encourage others to attend regular screenings and check-ups.

Christina Applegate is a very important figure for breast cancer awareness. She was diagnosed with the illness and became a breast cancer survivor at the age of 36.

Known best for her roles in ‘Married with Children’ and ‘Anchorman’ Christina has worked hard to advocate for breast screening among younger women, who are usually the hardest to reach.

A huge international star, Sheryl Crow has won a total of nine Grammy Awards for her contributions to Rock and Country music, but her other passion in life is raising awareness about breast cancer, of which she survived at the age of 44.

Sheryl had no family history of the illness or any risk factors. She works hard to inspire women to take control of their health and get screened regularly. 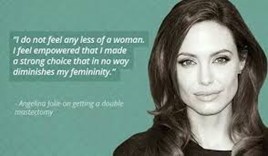 Last but certainly not least is the celebrity megastar, Angelina Jolie.

Angelina had a long family history of breast cancer and tested positive for the BRCA 1 gene which resulted in her opting to have a double mastectomy in her thirties, despite not having any symptoms. She reduced her chances of developing breast cancer from 87% to 5%, and she holds no regrets about her decision.

She is a strong role model for women who have undergone the same procedure and an advocate for preventative medicine.

Male breast cancer (MBC) is not a common occurrence. According to previously done research, it accounts for only 1% of the breast cancer incidences reported in the world. Well, Roundtree is one of those rare cases, but he fought back!

He is famous for his excellent acting skills, especially in his Shaft movies. He was diagnosed with the illness in 1993 when he was 51 years old. After a double mastectomy and chemotherapy, he was free of the threat of the disease.